Aircraaft mechanical engineering is basically divided into two main parts, airframes and engines. Airframes is a branch of engineering that basically deals with the whole body of the aircraft excluding engines and avionics. These are personnel that deal with repair and maintenance of the whole aircraft and its related systems. Engineers in this field will basically deal with structures and systems that either operate or are associated with operating systems of fuselage, flight controls, landing gear etc. . A person who Professional qualifies in this area, is awarded with aircraft maintenance engineers license (AMEL CAT ‘A’)) by civil authority of his/her country. In Kenya we have Kenya civil aviation authority.

Aircraft engines engineer or power plant engineer as commonly known is a mechanical engineer of the aircraft that deals with engines and the associated systems. The primary roll of the engine on the aircraft is to provide force (power) to move the aircraft forward. As such an engineer who is specialized in aircraft engines work would be to repair and maintain these engines and their associated systems to the highest standard possible. This person must work hand in hand with airframes engineer and avionics engineer to ensure mechanical safety of the airplane is guaranteed. Professional qualification in this area is a license in aircraft maintenance engineers l (AMEL CAT ‘C’) awarded by local authority, In Kenya we have Kenya civil aviation authority. The two careers are trained in Kenya aeronautical college. See units covered and fees structure.

We will shortly upload the training curricular for Airframes and Engines. Thank you for your understanding. 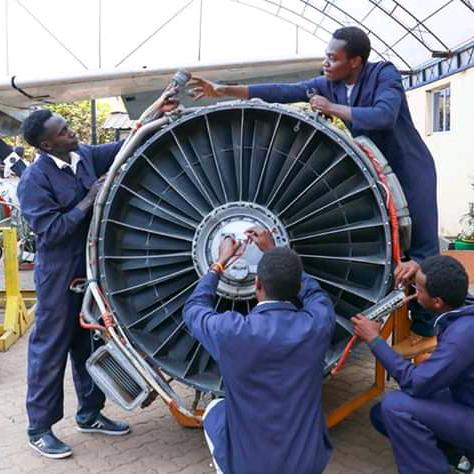